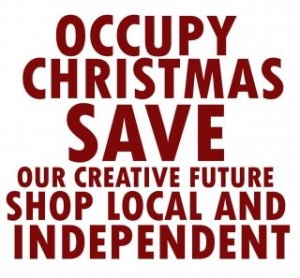 CNN did a recent report on an organization called Occupy Christmas, with its stated goal to encourage more people to buy American-made gifts this Holiday season.

According to the article, this group is trying to “help boost the domestic economy and reverse the tide of rising unemployment, for some, it means buying American. Others patronize mom-and-pop shops or crafts fairs or buy gift cards for local restaurants or services.”

According to CNN, the “Buy American” movement has been gaining momentum in recent years amid the economic downturn, steady unemployment and pledges from the Obama administration to reinvigorate the manufacturing sector.

A 2010 Adweek Media/Harris Poll found that 61% of Americans said they were more likely to purchase a product advertised as “Made in America.” In an ABC News special devoted to the topic, Diane Sawyer challenged Americans to spend $64 on American-made goods during holiday shopping, claiming that it would create 200,000 new jobs.

“A lot of consumers believe it’s a way to assist in all the issues we’re dealing with,” said University of Wisconsin consumer science professor Cynthia Jasper. “They believe that the money spent is reinvested in the local community in terms of taxes and jobs. Many consumers, because of the economic climate, want to to support their local communities.”

As Americans, we can control our destinies.  Let’s all make a concerted effort to switch 20% of our purchases to US-made products.

It will have a tremendous positive effect on this country in terms of increased employment opportunities, more tax revenue for our counties, cities, states and federal government, and an opportunity to reduce the growing deficit problem.

20% is a small goal that should be easily attainable if we take the time to shop around – and it can have far-reaching benefits.

Remember, the job you save may be your own!