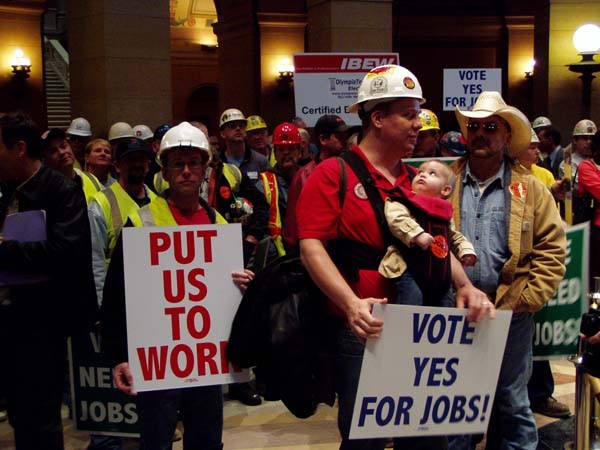 According to an article in the online Wall Street Journal, this bill makes Michigan “the 24th right-to-work state, banning requirements that nonunion employees pay unions for negotiating contracts and other services.”

GOP Gov. Rick Snyder, said the intention is to give workers a choice, not to target unions.

“This is about being pro-worker,” Mr. Snyder said.

Instead of getting $30 an hour for a limited number of union jobs, perhaps more factories will come back to Detroit and its surrounding cities– but at a much lower rate–say $10-$15 an hour.

Which is better— very few union jobs at a high wage or many more jobs at a lower wage?

The unions continue to fight this type of legislation, but in my opinion, it is a losing battle –especially as so many factory workers have been unemployed for 6-12-18 months or longer.

It is better to bring jobs into an area– so that ancillary businesses will follow-such as restaurants, clothing stores, pharmacies, supermarkets, etc.

These increased jobs help to improve the value of housing, helping people of Detroit and elsewhere to reinvigorate the economy.

Is it ideal?  No–but this is not the early 1970s anymore… and this country needs more American jobs.

With a global economy, too many American jobs have been outsourced due to union-waged jobs over the past few decades.

Now, we can begin to bring some of these jobs back home- and help restore America’s economy.

Although not ideal, keep this in mind: $15 an hour is better than no job. Let’s support factories and businesses that are taking the risk and moving production and manufacturing back to this country.