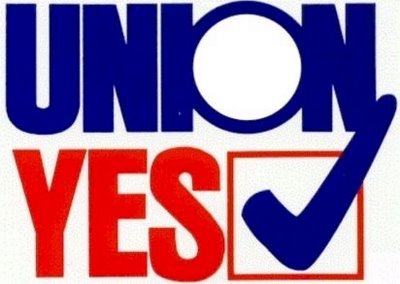 Increasing Support for Union Jobs Might Take a PR Effort Austin, Texas: There has been a great deal of press over the past few months about Union jobs and the increase in right to work legislation in some states.

Although our company, BuyUSPromos.com tries to promote American jobs whether they are unionized or not, we have been paying special attention lately to adding more Union-shop factories to our list of vendors.

After meeting and dealing with these hard working factories, our New Year’s resolution was to increase by 20% the number of Union shops that we work with in 2013 — in making our tote bags, imprinted bandannas, water bottles and mugs and other promotional products.

I have been turned off by the way the media has been portraying the Unions and its members and feel that it is time to support these Unions — before they do not exist any longer.

I also think that it is time for the Unions to fight back in the media —  in public relations — on the air, in social media – wherever — to explain the value that Unions offer the country.

Perhaps if Americans hear from Union workers (not necessarily strident Union leaders), then a softer and more honest image can be created and the role and value of Union workers can be re-established.

Fighting for higher pay regardless of the profitability of factories is a losing argument.

Fighting for greater respect, better working conditions and a fair wage is certainly something that most Americans can stand for.