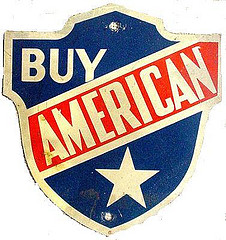 Do You Support American Jobs?

Kudos to American Apparel CEO Dov Charney for taking on the American retail  industry’s ‘Blind Pursuit’ of Low Wages in the aftermath of the horrific accident in a Bangladesh factory last week.

Charney writes, “The apparel industry’s relentless and blind pursuit of the lowest possible wages cannot be sustained over time, ethically or fiscally. As labor and transportation costs increase worldwide, exploitation will not only be morally offensive and dated, it will not even be financially viable.”

He goes on to say why he chooses to keep jobs in the United States at $12/hour rather than to outsource.

Yes, prices might be higher from American factories – but Americans with jobs are able to afford more products and services from other companies.

There is definitely a multiplier effect with American jobs.

Are you supporting American jobs with your wallet ?

If not now, when?

It is one thing to say you support American jobs.  It is another thing to pay for goods and services made by American companies.