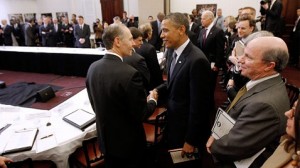 Forget about “outsourcing”.   The new buzzword for the year 2012 will be “insourcing”.

According to an ABC News report, Obama is pushing the trend they call the “insourcing” of jobs back to America.

“You’ve heard of outsourcing.  Well, these companies are insourcing,” Obama said during remarks in the East Room, where he was flanked by U.S. business leaders who’ve committed to keeping work on American shores.

“These companies are choosing to invest in the one country with the most productive workers, best universities, and most creative and innovative entrepreneurs in the world: the United States of America,” he said.

The White House says in a new report that 334,000 manufacturing jobs have been created in the U.S. over the past two years and that manufacturing production has increased roughly 5.7 percent, the fastest pace in a decade.

Meanwhile, the outsourcing of jobs by U.S. firms has slowed dramatically under Obama, according to the most recent statistical snapshot by the Labor Department.

“I have noticed that more and more people that I meet online, on the phone and at trade shows are excited that we are offering American made promotional products”, says Robert Piller, owner of BuyUSPromos.com.

“Especially in an election year, people are starting to feel more patriotic, and increasing sales to American factories just makes good business sense.  With the longer lead times of imported products, uncertainty of the quality and safety of the materials and a desire to help reduce our unemployment rate, “insourcing” should be on top of everyone’s mind these days”, he continues.

Remember, the job you save may be your own!