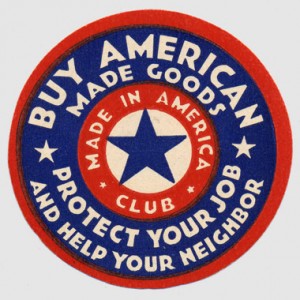 How Many More Factory Fires and Deaths Will It Take Before People Insist on Buying American Made Products? Austin, Texas: Factory workers are dying around the world at an alarming rate ..in a rush to eke out every inch of profit.

The other day there was a fire in a Bangladesh factory that killed 117 workers.  This factory was alleged to be making products for Sears, Disney and Wal-Mart, according to USA Today.

Whether it was arson or not, an article from CNN says that “The state-run news agency Bangladesh Sangbad Sangstha recently reported that some 6,000 people die every year in fires in Bangladesh.”

Workers at Foxconn making Apple products have a high incidence of suicide among its workforce due to long hours, tedious work and poor work/lifestyle ratios.

How many more deaths of innocent factory workers will it take before American consumers are willing to pay a little bit more for products that are actually made in America?

We should look to these deaths and finally decide that we are better than this.

Are you willing to pay a little bit more for your Christmas gifts knowing that your items were Made in America?

American-made goods are produced to a higher standard.

Most of the issues about lead turning up in glassware and other products have all been made overseas.

Most of the reports about toxic chemicals added to consumable products are also made overseas–where regulations are not very stringent at all.

Politics aside, it is regulations and fair work hours and pay that have built the American middle class.

We need to support those workers — to ensure a higher standard of living for all Americans.

There is a huge multiplier effect that comes from one American worker spending their money on other goods and services, which lead to greater production, higher sales taxes paid to states, more income tax paid to state and federal coffers – and the cycle keeps continuing … as long as we continue to buy American.

Remember, the job you save may be your own.